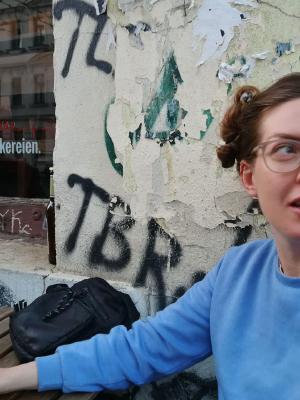 I am Alexa, a self-employed creative technologist, software developer and artist based in Leipzig!

I mainly build web applications, websites and data visualizations. I specialize in frontend development and the programming language Javascript.

In recent years I have worked with a wide range of clients: For the UNO in New York, for example, I realized several major web projects from 2015-2017, sometimes on site in NY, sometimes from Leipzig. I have also worked on projects in the field of data journalism, for example for Zeit Online in Berlin. At the moment I’m increasingly active in the local startup scene in Leipzig.

That was about 10 years ago when I went to Southern France as part of my first university degree at art school. I had heard about this art school where the students played around with microcontrollers like Arduino, and with processing and 3D libraries. There were courses in robotics, interactive installations and generative algorithms. Code was simply seen as another means of artistic expression! I remember one task where we had to write code that generated some cool geometric shapes - but with one limitation: the code had to be short and compact enough to fit into a tweet!

Programming hasn’t let go of me since then, and after studying art, I went on to study for a second degree: a bachelor’s degree in Artificial Intelligence in the Netherlands. And yes, that was even before there was the language assistant of the same name “Alexa” from Amazon to buy :-)

For about 6 years I have been working in the field of web development. There I can build on a lot of what I learned in my two studies, especially visual and algorithmic thinking. Nevertheless, I’ve built a large part of my web development skills on my own, through online courses and learning-by-doing on many, many projects.

I just find it very satisfying to be a maker! It’s always this sequence: There’s a problem, or a goal. At the beginning you have no idea what the solution will look like. Then you break down the problem and try something out, and the solution gradually takes shape. It is this power that you feel when you create something completely new out of virtually nothing, something that is able to “do” something and functions like an organism.

I also like working as a developer because it’s a balance of communicative and contemplative activity:

The fact that software development is communicative is often not so present in external perception. Software projects are always developed in a team, mostly composed of people with different perspectives: Designers, developers, infrastructure people, marketing people. You have to be able to put yourself in other people’s shoes in order to speak a language that makes sense for your counterpart.

By contemplative I mean the state you get into during coding. Most of the time you think a lot and try a lot. It can be compared to the work of writers who sometimes work on a single line of text for a very long time. You can sink in very deeply. A lot of people are such mixed creatures of introverted and extroverted. As a developer, you can live both quite well, and if you’re more of an introverted type, then that’s also respected in this industry.

Last but not least, what I find wonderful is that you (almost) can’t destroy anything irretrievably. In the digital world there’s the wonderful Control-Z, which you don’t have as a car mechanic for example.

I am coaching a woman from MDR (Mitteldeutscher Rundfunk) who has set herself the task to learn the basics of programming in a short time. We have devised a very amusing programming challenge for her: She should write a small script for the dating platform “Tinder”, which automatically wipes all suggested candidates to the left (so: away) who write something about “sport” in their respective self-description. Because she is quite annoyed by sports and just doesn’t get extremely sports-obsessed people.

After my AI studies, I have moved a long way away from the topic of artificial intelligence and machine learning. At the moment I’m very interested again in how Machine Learning techniques can be applied in an artistic practice. In a few days I will be doing a workshop in this direction: https://sensorium.is/workshops/ai-for-augmented-creativity

First, a full-time job in a noisy office.

These two topics gnawed at me quite a bit some time ago, but meanwhile I look back on them and see how they dissolved into pleasure:

I actually have a folder on my computer where I collect cool women from the tech world! And there are a lot of them already. How much space is here? :-) Here come the first ten:

Ire Aderinokun - I find mega, she is a frontend developer and UI designer from Nigeria and makes extremely well researched Article and Youtube Videos on various frontend development topics

Jen Simmons - Revolutionary for graphic design on the web

Val Head - UX and Animation on the Web

Sara Vieira - for her badass humor with which she takes the tech industry for a ride.

**Cliché 0: That you handle zeros and ones

**Cliché 1: That you have to be good at maths

**Cliché 2: That you sit alone in a closet and don’t talk to anyone.

**Cliché 3: That you have to know programming language syntax by heart to write code

Best you take a look at my are.na page, where I organize and share my net finds.

I’m a big fan of Mozilla (the non-profit organization behind the Firefox browser) and how they advocate for the open Internet, that puts people at the center and that everyone can participate in. Their annual Internet Health Report is always an eye-opener for me.

Mozilla also organizes an annual event: The so-called “MozFest” (21-27 October 2019 in London) which I can warmly recommend to anyone (programmer or non-programmer). I was there last year and wrote an article about it:

The friendliness, openness and impartiality of this interdisciplinary community at MozFest should be an inspiration any (tech) community!