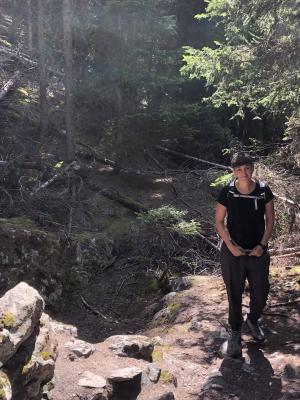 On the way..
Skills: HTML, CSS, JS
Meet me at: OpenTechSchool Meetup

Hi, I’m Christina. In my former life I was a graduate traffic engineer for aviation & logistics and worked at different stations in the field of aviation after my studies. I call it “former life” because I decided (even if quite late) to take a new path and enter the field of IT. And I’m on this exciting path right now and honestly ask myself why I didn’t do it sooner. But probably everything takes time.

Hmm… that’s not so easy to say, because I needed quite looooooooonnng for it. Station 1: School - hmm… no… there was nothing. Station 2: Study - hmm… one semester Turbo Pascal. That was rather deterrent. But that was not because of Pascal… but because of the mediation… so I can say, at that time I definitely had not yet tasted blood. And writing my diploma thesis in Latex, which was unknown to me at that time, under time constraints, was no real joy either. Station 3: DjangoGirls Workshop - my girlfriend Norma (profile can also be found here at Hackerinnen.space) came back from Berlin with an infectious enthusiasm and the idea that we organize a first DjangoGirls workshop for Leipzig. That’s what we did, although my focus was more on supporting the organization and not on programming. The workshop itself was great… the energy in the room… more workshops followed. And only then, I also took a look at the code. Station 4: OTS - Open Tech School. After we realized that a workshop weekend is all well and good, but somehow something regular as a contact point would be even better. We quickly found other people who felt the same way and finally the OTS Leipzig was founded together. With super cool, very different people, who I would not want to miss anymore. And by the way… my interest in programming grew. Station 5: CodeCampLeipzig (now Devhaus Leipzig)- I really wanted to find out for myself whether programming and I could become something. For a 3 month course I took unpaid leave and don’t regret a single day of it. It was just great! I had not had so much input in the last 10 years. - But it was Corona, the job market was uncertain, and I stayed in the safe harbor for the time being. Station 6: now I’ve landed at Thinkport GmbH - in the business development area, but with the deal that I’ll continue learning to code. And now I’m dealing with cloud stuff, with Terraform and Kafka and what can I say, it’s a lot of fun.

It’s a bit like magic, I think. Even though it’s much more the logic and the modular principle behind it. I like that. It’s a bit like flying. I know why airplanes can fly, purely physically, but I’m still fascinated by it like a child.

hmm… i’m still learning… this is my project for now… when i can apply the things really practical then you can ask me that again.

I am already in the process of trying something, so I can’t say for the future.

Not as a programmer, but rather in general to decide on a new path. To have the courage to get out of the old rut and start over.

Oh, there are so many great people. I can’t even list them all here.

That programmers are all weird, non-talking, basement-dwelling siting, pizza-eating nerds. Of course there are exceptions, like everywhere… but there is actually a lot of talking (with each other). Most of the people I’ve met so far are very open and helpful. Simply people with whom you can spend time with pleasure.