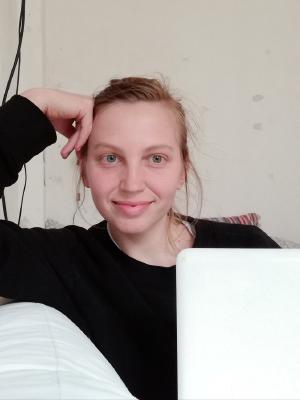 Being born and raised as a half Croatian in west Berlin by a teenage mom gave me my Pippi Longstockings mindset. In university I studied philosophy and historical linguistics and my perspective on code is heavily influenced by these two subjects. First (since 2017) I worked at Absolventa in a team of 5 other cute quirky developers like me. Now I work for Liefery in a bigger team with a lot of lovely people. In my freetime I go on demonstrations for social justice issues and play football (soccer) in a feminist fooball club. Also I am a proud organizer of code curious (former Rails Girls Berlin). During the Rails Girls Summer of Code 2017 I contributed to Discourse together with Jen who is now a beloved friend of mine. Also I am a huge fan of Nynne’s @Rijks_bot on twitter, please check it out!

In 2016 my boyfriend asked me for help with his website. I didn’t even know what HTML was back then, but he was convinced that I would manage to help him and I did. It was a huge discovery for me that I enjoyed spending my nights infront of my laptop searching for solutions for code problems and soon I realized that I want to join a community in order to learn with and from others. That’s how I found the Rails Girls Berlin and attended their workshops.

I love that it caters exactly to my joy of solving problems in a creative way. Also it is usually a mixture of looking at conventions and then also coming up with something totally new.

Actually I really enjoy the projects that I am working on at my job 🤓, but I also like that I could delegate a pet project of mine to a study group that I sometimes coach: A community calendar

Is there a project you’re particularly proud of?

I am proud of the plugins that we built for discourse during the summer of code, cause back then I was such a noob and still we managed to build something great and useful for an OS project.

I am really good in coding with Ruby, but I want to learn what is happening on a lower level, so currently I am reading “Ruby Under A Microscope”. Also I love Elixir, Prolog and I want to learn Python as well.

Toxic masculinity in the field. I am actively fighting it.