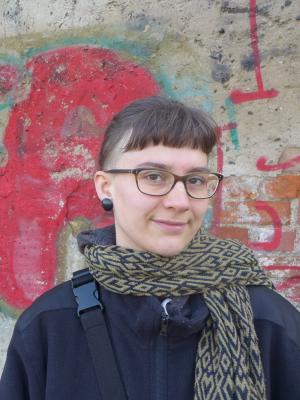 I’m Katharina. I am spending my time with asylum court claims, conquering computers or gardening, for example. I am studying an IT Bachelor at the University of Leipzig. I also like reading, thinking and discussing about feminism.

Two years ago, when I was 24. I had finished my first bachelor in Political Science and was thinking about what to do next. In my activist work (asylum law counselling), I had got in touch with topics like data protection and secure digital communication, and I became interested in IT security. I wanted to find a degree specialized in IT security, but at the same time, I also wanted to stay in Leipzig. So I ended up with the “normal” IT bachelor that I study now. I tried to get some more focus on security by visiting a course at the college in Mittweida for one semester. But I also understood that in order to really understand IT security, I need to have a deep understanding of lots of other topics as well. This is how I managed to put my impatience at ease :)

I’ll say what I admire most about hacking: It feels like a very powerful tool for equality and justice. One of the coolest (probably) women of our times, the hacker Phineas Fisher, proved that hacking is one of the rare areas where you can actually have something like an equality of weapons: She hacked a company from Munich that is producing spyware and selling it to dictactorships all over the world. (Just to get it clear: She hacked a company specialised in spyware.) Some years later, several NGOs handed in a court complaint against this company, partly based on some proof gained by Phineas Fisher’s hack. That’s amazing! Check it out: https://www.supernovamag.de/hacking-links-phineas-fisher-bank-leak-feministisch-antikapitalistisch/

My big current project is the one in my student job: I’m working on an Open Source management software for NGOs. I’m adding some functionalities and adapting the software to the NGOs' needs, mostly programming in PHP.

I have lots of ideas: I’d like to set up a Raspberry Pi as my backup server. I’d like to write a program that destroys your individualized Google results bubble by searching for random shit constantly. Or maybe I’d like to create a workshop about what everyone can do to protect their data. When we talk about “data protection”, it sounds like a boring bureaucratic requirement. But our data tells people how we think and feel, how we live and decide, how our minds work! Data protection makes one of the differences between manipulation and self-determination. It’s about fighting for freedom. That’s why I prefer the term “digital self-defense”. Anyway, feel free to write me if you are in the mood for some of these projects - or if you have own ideas that are somehow connected :)

Hmm… Not talking to my computer when programming…? :)

The idea that as a real IT person, you have spent nights and nights at LAN parties with the boys when you were 14. I have never been part of that. At the beginning of my IT studies, I sometimes felt like the others just magically already knew all the things. If you are in the same situation, don’t loose your courage! I want to tell you four things that may cheer you up:

The film “Hackers” from 1995 :) And this retrospect documentary on the early days of the Chaos Computer Club: “ALLES IST EINS. AUSSER DER 0.” (https://allesisteins.film/). It will be screened in the cinemas starting from January 2021. And for events, I can recommend you the Chaos Communication Congress!