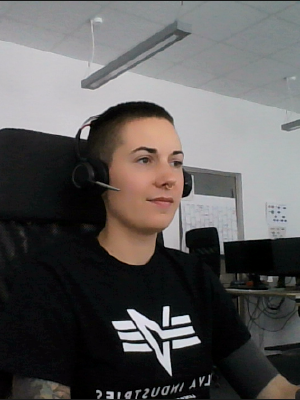 Hey, I’m Yvonne. After graduating from high school, I got completely involved in the world of books and started a FSJ culture in social library work. There I went to elderly people to provide them with literature, audio books or movies. After that, I was able to start an apprenticeship at the Städtische Bibliotheken Dresden. Then I wanted to top that off with a degree in librarianship. However, after a short detour via German studies and various minor subjects, I had to realize that the university and I were not going to be friends. The self-organization of the university was difficult for me at times, and with two part-time jobs that I needed to buy more books, the university somehow took a back seat.

What now? I was in the mood for something new, but had no idea where to start.

How and when did you start programming?

I had computer science at school, but at that time I couldn’t do anything with it. In retrospect, I think that’s a pity, because if I would have started to deal with it back then, I could have learned so many cool things by now.

So 3 years ago I came across the site of the Code Girls and their workshops - and I had tasted blood. Via detours I then came across a Django workshop at the Basislager and realized that I enjoy programming quite a bit. I didn’t want to drop a third degree, so I thought I’d try an apprenticeship. Since 2019, I’m now an apprentice for IT (direction application development) and will finish in 2022 (exciting!!!).

What I like most about programming is that you can build worlds with languages. I write a few letters that end up as a lot of code files that create a web page or an app or something I make up as I go along. Sometimes a character is missing somewhere and makes the code buggy. When I find that and fix it, suddenly everything works again; that’s a wonderful feeling. I also find solving tasks and finding bugs extremely satisfying. I missed that in the library world.

I’m still very fresh in the IT world and don’t have a personal project yet. But the project I’m working on in my training is interesting to the extent that I can learn a lot. Roughly speaking, it’s a tool to log employees off or on (when they leave or join the company), including deleting and creating all the accounts that are needed.

What would you like to try/learn/be able to do in the future?

I would love to build a chatbot and I also find a Tiles World very exciting. I would also like to learn about apps or program a small jump-and-run game of my own.

What has been your biggest challenge as a programmer so far?

That was definitely getting out of my first training company. When I applied for an apprenticeship, only two invitations came back out of 30 applications. The company that it then became seemed okay to me, I had hardly thought about what I could expect and thought to myself, “Just be glad that you as a woman in your late 20s got something at all”. Today I think differently and more confidently, but at that time I just didn’t want to make any demands. Colleagues were nice to me, but couldn’t let a day go by without sexist or racist comments on all sorts of topics. On top of that, my duties were limited to writing manuals, designing posters, and writing Facebook posts. It took me some time and courage to apply elsewhere, but by the 2nd year of my apprenticeship I had found a new company and have been very happy ever since. I’m finally learning to program and mostly feel comfortable in the team, as the only woman.

Do you have any role models?

Off the top of my head, I can’t think of anyone I would call a role model. But I know people whose actions I would like to take as a role model. These are people who are brave enough to get out of life situations that are not good for them. These are also people who are open and helpful, who admit mistakes and allow others to make mistakes. These are the people from the Haecksen Leipzig that I had the pleasure to meet and who all said they were afraid to look for other Haecksen and networking and then had the courage to come to the first Haecksen meeting.

What cliché about programming can you immediately refute?

It’s not all ones and zeros, you don’t have to have been to 50 LAN parties or built your own computer by the time you were 12 to call yourself a programmer. I don’t know by heart what kind of USB connectors there are or how many bytes a mebibyte has, but I learn every day and I think there is no day X when you can call yourself a programmer. Just do it and feel the magic :).

Do you have a book / podcast / tutorial / movie or event recommendation?

I love the series Mr. Robot, the mood of the series and the focus on hacking I find exciting. I would like to recommend the Haecksen podcast and of course the end of year event of the CCC and the Haecksen.